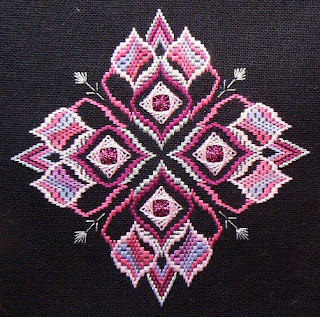 Project: Wild Rose
Designer: Patricia Hartman
Type of needlework: Bargello
Photos: 2
Other designs from Patricia Hartman here.
ANG National: http://www.needlepoint.org/index.php
ANG Chapter Booklet:  http://www.needlepoint.org/CPB/index.php
ANG CyberPointers: http://www.cyberpointers.org/
Comments: This is a free project that came from the Chapter Project Booklet that as a member of CyberPointers I was able to obtain and stitch with fellow bargello enthusiasts.
I have used the same colors that Patricia Hartman has used for hers, but since none of us have actually seen a color photograph of the initial project, my placing of colors is in all probability different than what did Patricia with hers.
Those are not quite the colors that I normally work with but decided to use them anyway since the name of this project suggested it was a "wild" rose. I must say that I am glad that I followed my instincts and went with her colors instead of changing them as I really love how it looks.

(Close-up of a section with the Jessica's mistake)
I realized that I had made a mistake with the Jessica after taking this photo
and have corrected that mistake afterwards.
UPDATE: JUNE 30/2010
Well, strange things seem to be following me these days. A bit of story here. First of all, I would highly recommend for anyone stitching this piece to stitch it on a bigger piece of canvas than recommended. It will make things much easier for framing.
There was a bit of a mix up between my framer and what my husband had asked her to do with this piece. I requested it to be framed diamond shape. In the past when I made special requests I took the precaution of cutting the canvas according to the orientation I wanted. I did not do it this time around as I felt there was not a whole lot of canvas surrounding the stitched piece, so I just left it as it was after stitching.
They decided to put a black mat under the black canvas and it does look absolutely wonderful. The two frames selected I also love. There is a tiny one inside the bigger pink one.
The only problem is that I ended up with it framed like you can see below, which is not bad at all since this is not a big piece. My framer said that she would redo it if that is what I wanted but I would end up with a smaller frame, which is something that I really don't want, so I have decided to keep it like it is.
Things would have just been so much simpler if my canvas had been bigger to start with. I am one of those stitchers which prefer to have a bigger piece of canvas than a smaller one. Unfortunately for me I had no idea of the dimensions needed when I started working on this project. Anyway, I do like it just the same. It is just one of those things but have learned a few lessons out of it. 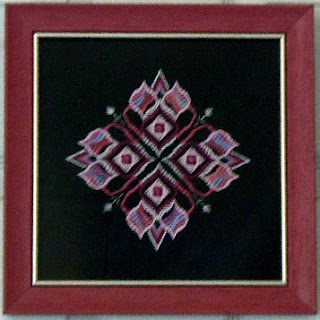 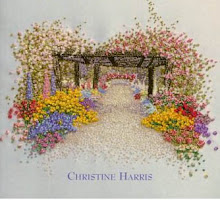 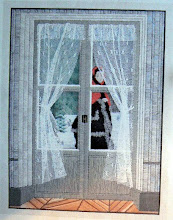 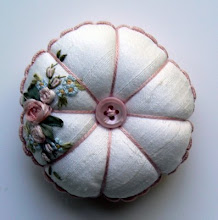 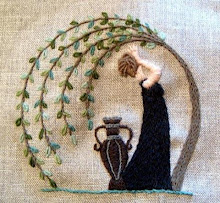 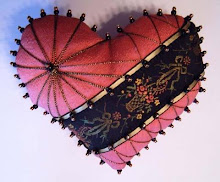 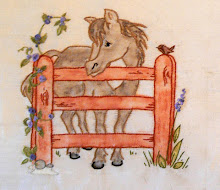 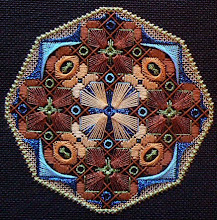